Rich history, rest and relaxtion in the heart of France

Domaine les Gandins belonged to the Glory of Saint-Julien located in the Auvergne to Culliat, then known as "La-Cour" from the 16th century.

On 16 September 1674 Master Philibert Bonnelat, lord of Clerat, lawyer in parliament, granted his cousin the rights to the farm "La Grand-Cour", located in the parish of Saint Cyprien and belonging to the glory of Saint-Julien Culliat.

In November 1720 Mr. Jean-Joseph Martin, Lord of Fremont, bodyguard of His Majesty, bought the estate. He paid the owner at the time with the transfer of three pieces of land situated in the parish of Saint Cyprien.

At the end of the 18th century Domaine les Gandins and all its outbuildings and grounds, were seized from Vincent Martin - Fermont, and sold publicly. The entire estate was awarded to Louis Lacroix, for the sum of 172,600 francs paid to the Republic.

Early 19th century the Domain belonged to Claude Lacroix, Vice-Lieutenant of the National Guard of the municipality of Saint-Germain-de-Salles. Lacroix was born on February 3, 1803 at Les Gandins. According to the Land Registry Les Gandins covered an area of 52 hectares in 1834 and belonged to Jean-Baptiste and Claude Lacroix, now promoted to Captain of the National Guard.

To enlarge its domain Jean-Baptiste Lacroix acquires the mill Plagne on January 1, 1837 and he annexes the meadow and the field around the mill located on the border with Ceron.

His property was situated along the Sioule, "from the young hinds to the deep alcoves" and crossed the river at the fords.

In 1876 Les Gandins was inhabited by Andre Crozat , 43 years old, born in Paray-sous-Briailles in 1832, his wife Marie-Antoinette, their daughter Marie-Antoinette and Pierre-Jean-Baptist their 13 year old son and three servants, which made a total of seven residents.

In 1910 the Domaine belonged to Marie-Antoinette Crozat, born as Lacroix the widow of Andre Crozat.

In 1946 Domaine les Gandins was sold to Georges-Adrien Gilberton and his wife Jeanne-Juliette. Georges Gilberton held a high position at the French energy company EDF. In the early 50's he asked the council permission to establish a water point in the Sioule to create an irrigation system. The pump house is still on the Estate.

Gilberton built the estate to its current state, the property extended to more than 100 hectares, the cottages were occupied by the laborers, servants and employees.

In 1981 after the death of Georges Gilberton the lands of the estate were divided. Today it covers 10 hectares. After 1981 the ownership of the estate changed three times, until the rich history of Domaine les Gandins was continued by the current owners from November 30, 2012.

Currently hospitality, leisure and space are the key values of this beautiful property. The main house with three guest rooms, is surrounded by authenthic buildings which have been transformed into gîtes, a camp ground in the park (small campsite), ten Openair Lodges and two chalets.

In addition there are many animals such as cats, sheep, chickens, bunnies, a turtule and summer grazing Charrolais cows in the surrounding fields. 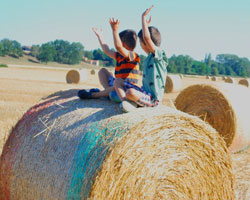